How the Phrase “You Guys” Came to Be

Home » Blog » How the Phrase “You Guys” Came to Be

HOW THE PHRASE “YOU GUYS” CAME TO BE

As a writer, I have always struggled with second-person pronouns. Having spent the last few years working with a Houston-based writing team, I have taken to occasionally using “y’all” in my everyday speech. However, writing “y’all” seems to be too much of a commitment for me. As a non-Southerner, it somehow feels like I am being an imposter.

But, what other options do we have? “You guys” is generally the most common second-person plural pronoun used in the non-south, yet some people take offense to being referred to as “guys.” And although “thee” and “thine” were once common ways to refer to a singular person, with “ye” being the plural, those terms have since fallen out of fashion.

But, why did “thee” go away? And how did we start using “you guys” to address a group of people?

As this fascinating article from TIME explains, “thee” and “thine” lost their luster in the 18th century, due to the fact that they started being viewed as a disrespectful way to address a person. With “ye” evolving as a way of showing respect, the use of “thee” and “thine” became somewhat of a stigma.

As for the usage of “you guys,” it all goes back to an English Catholic “arch-villain” named Guy Fawkes, who, in November of 1605, devised a plot to explode 36 barrels of gunpowder underneath the House of Lords in London.

While his plot was folded (and he was caught) before he was able to blow a bunch of Protestant government officials to smithereens, the story of his scheme became widely known around England. Realizing how close they came to being killed, the trial, torture, and eventual execution of Guy Fawkes was not enough for the government officials. 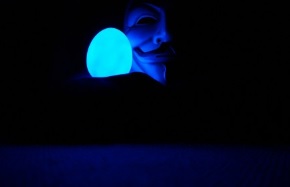 As an act of remembrance, Parliament approved a “Fifth of November Act,” or, “An act for publick thanksgiving to Almighty God every year on the fifth day of November.” This new holiday featured special religious services during the day and bonfires at night, to mock the man who hadn’t succeeded. In the bonfires, effigies of Guy Fawkes, the Pope, and anyone else deemed as archenemies of King James’ Protestant government, were burned. The effigies became known as “guys” after Guy Fawkes.

Over time, the term “guys” started being used to refer to actual people. More specifically, people who were viewed as low-class and depraved. Over time, though, the term evolved to include working-class men, and then, eventually, included all members of the male persuasion.

“Guys” became such a popular generic term for a group of people, that by the 20th century, even women started using the term. It was at that point that “guys” ceased to be a uniquely male term, and started being used for groups of people in general.

Language is constantly changing, though, so eventually “you guys” may be fully replaced with “y’all” (or even another term that we have not yet invented). Until then, depending on where we live, we may have to settle for being called “you guys.”

Author
Jennifer Rizzo
Jennifer Rizzo is a Denver based writer with a background in Healthcare, International Tour Management, Genealogical Research, and a passion for travel and languages. She studied Spanish at the University of Guadalajara in Guadalajara, Mexico and also lived and studied in Ancona, Italy. After spending nearly a decade working in the health care field, Jennifer has a well-rounded knowledge of hospital functionality, medical terminology, and disease processes. She has extended work experience with government medical benefits as well as Social Security law, which has allowed her to fine-tune her ability to sort through large amounts of medical records, research, and data, and turn that information into well written reports and case briefs. Since joining The Writers for Hire, Jennifer has written on vast array of topics and has done many in-depth ancestry research and family tree projects. She has worked as Project Manager for various client websites and RFPs, as well as other projects. She enjoys working closely with clients, and loves any opportunity that allows her to indulge her creative side.