How to craft a winning press release

Home » Blog » How to craft a winning press release

HOW TO CRAFT A WINNING PRESS RELEASE

What is a press release and how is it used?

The first press release was facilitated by public relations industry “founder, Ivy Lee, in response to a 1906 New Jersey train wreck. Lee wanted to ensure that details about the crash were communicated from the Pennsylvania Railroad to media (in this case, The New York Times).

The idea was generated based on Lee’s philosophy that public relations personnel have an obligation to foster ethical public reporting—that is, to share company information in an unbiased and transparent way.

A press release provided an immediate and formal communication tool for directing accurate information to media personnel to ensure clear reporting from a reputable news source. 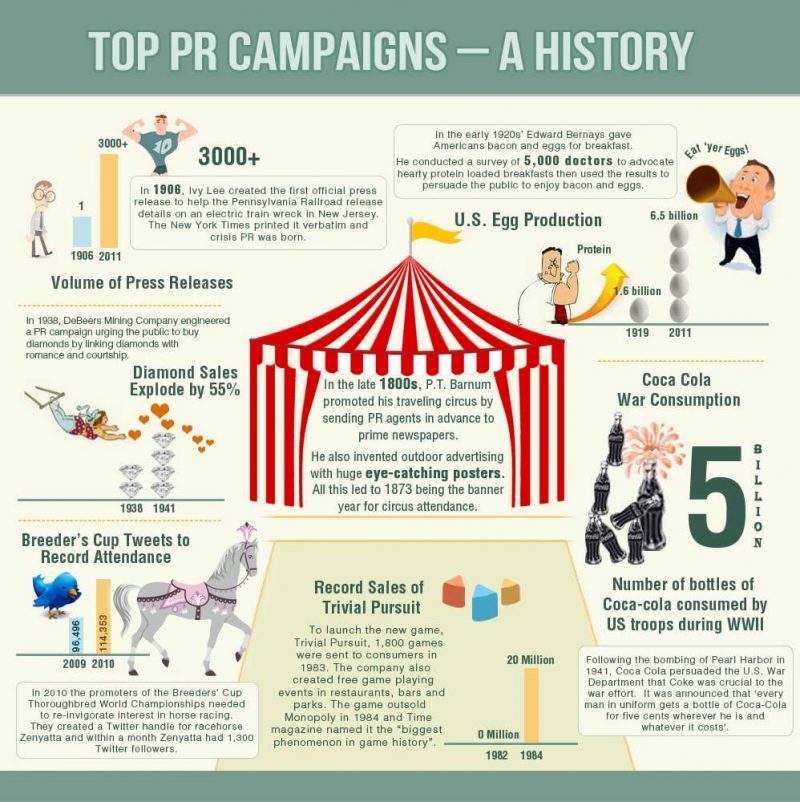 From that day forward, public relations professionals began to use the press release as a go-between communication tool between organizations and the press. They were sent to media contacts with specific, previously unpublished or unpublicized details.

A press release would have, for instance, advised media teams of the scope of an emerging story (such as the train wreck), plus where and when reporters could arrive on scene to cover an important story. Having an easily recognizable format also ensured that editors would note a press release as a relatively urgent call to action and (hopefully) prioritize its distribution accordingly.

Back in the day, press releases would have consisted of a few formal elements which are still used today: 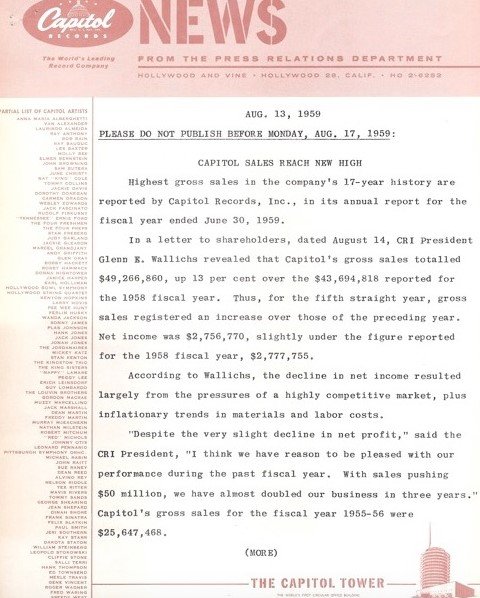 Anything an organization deems newsworthy can theoretically be shared via this format. The trick is presenting it in such a way that the media personnel on the receiving end also deem the announcement as a story worthy of coverage, rather than an advertisement.

“Essentially you are going to be in competition for ad space, but you aren’t paying for ad space. You have to make it stand out enough against both paying advertisers and other (non-PR) news, so you’ve really got to craft it into a story.” ~ Lisa Avery

Your story can certainly touch on your brand and products, but it must also offer something of value to the audience beyond just “here’s a product to buy.”

For instance, the Capital Records example above tells a story about factors that potentially contributed to its high profits—presumably for the purposes of attracting business investors—rather than just saying “buy our records!”

The relevance of the press release in the digital world

As media evolves from primarily print to mostly digital, the nature of the entire publishing industry is changing along with it. According to journalism.org, in 2016, only about 20 percent of Americans got their news from print newspapers, with most others getting theirs from either TV or web-based media.

As far as written content goes, people no longer rely on professional journalists for primary news reports. All they need to do is check the latest app or open their Twitter feed, and the latest “news” is delivered instantaneously.

Businesses more frequently produce their own PR material for internal or affiliate publications, and small, indie publications publish blog articles from “armchair journalists” without necessarily maintaining professional journalism standards of ethics. In addition, some 60 percent of journalists are finding their stories online.

While there are many advantages to having a more open stream of information coming at us, there is far less regulation with regards to accuracy and ethics in reporting—basically, anyone can write and publish almost anything they want. Various forms of “fake news” are floating around everywhere. Or, at the very least, facts are not consistently reported thoroughly or accurately today.

Another concern is that the original intent of the press release seems to have gone astray—it’s often used as an inbound marketing device these days, rather than a reporting tool. Given this trend, and the shifts in the way businesses, consumers, and journalists are consuming and publishing media, some have been proclaiming the “death” of the press release.

It is fair to say that to the extent that the press release was originally meant to be a frequent, formal, and immediate communication tool, it’s not being used in the same way as it was, or as often.

But given the world’s affinity for (potentially) “fake news” these days, the press release may be more important than ever.

Press releases can still be effective tools for unbiased and interesting reporting when carefully composed and targeted appropriately.

But before sitting down to write a press release (or almost anything, for that matter), you need to have a clear understanding of their purpose, as well as how it will be received on the other end. If you don’t write something that will be of genuine interest to journalists and audiences, you’re just wasting your time.

So, before you start, ask yourself:

You’ll want to ensure that you gather your information carefully as you prepare.  This may include clearing details with your company’s CEO, collaborating with relevant staff, and double-checking details about other participants who may be involved in the resulting news story.

“Be very mindful of the content you are including in the release, and which spokespeople you are using. For instance, if you’re working for a social welfare charity you will need to confirm that any beneficiaries mentioned or quoted have given their permission. Some people are more than happy to talk about the amazing help they’ve received, whereas others prefer not to get involved. It’s essential to treat individuals or communities with dignity and respect to ensure their own welfare, and to retain the integrity of the charity’s work.” ~ Elma Glasgow

Here are some more expert tips on designing your press release:

How to get busy editors to notice your press release

Editors on the hunt for stories are on major information overload 99 percent of the time—so part of creating an effective press release submission is really about capturing their attention…and fast. Offer them something of interest to their readers, and be up front and respectful as you build relationships with them.

Jamie Khoo, former journalist for a major women’s fashion magazine, recommends that you get to know the ins and outs of the publication itself—what types of articles it features, the voice, what types of images work best in the given context, and so on. She also stresses the importance of personalizing each press release.

“Make a personal connection without being annoying. Face time dramatically decreases the chances of them ignoring your name in the inbox. Reporters are busy. If they don’t want calls, respect that. But invite them to have coffee or lunch, reach out to them at networking events, follow them on social media, and show you appreciate and follow their work.” ~ Amy Robertson, Strategic Communications Specialist

The editor should be clear on why they are reading within the first few seconds of scanning the piece. They should understand clearly what the message is for the end user.

The press release is often used as an implicit branding tool, but remember that in this genre, form fits purpose. By its very nature, it’s not the same as a pitch or an ad. This is information to send to the press for them to re-work and distribute as they see fit, so it’s crucial to send them relevant information, not fluff.

Given the digital format of most media today, it may seem like a logical step to format press releases to be published online as traffic-generating tools. While this is entirely possible and can be a good method for some, sending press releases “on the wire” (e.g.: through sites like PR Newswire) does not have the same sort of story and connectivity power behind it that a well-written and targeted press release can.

Even though journalists and editors are finding some of their stories online, many media professionals are still interested in receiving compelling, well-crafted, relevant press releases for story material.

Here’s an example of a press release distributed via PR Newswire that was subsequently posted word for word by this digital publication:

Does the ease with which we can publish digitally mean that we should just put advertorial content online and call it a press release in the hopes that it gets picked up by the press, or should our targeting be more deliberate and specific?

Several years ago, when companies started to print a lot of their content on their own sites, they figured out that press releases could be solid SEO tools and began to use them frequently in inbound marketing.

“This shift led to a glut of releases that were no longer “real news,” but promotional content stuffed with keywords and hyperlinks to affiliated sites and networks designed to ‘game the system’ and put the content on page one of the search engines.” ~  Sara Callahan, owner of Carter West Public Relations.

This trend essentially tempered the strength of the genre as a credible reporting tool: without the neutrality offered by professional reporting, these “press releases” were akin to self-promotion. But Google noticed this, and responded by adjusting their algorithm to punish organizations setting up clickbait-type press releases by reclassifying these types of sites as link schemes.

Today, going heavy on the SEO is clearly not going to benefit your business, and publishing at sites like PR Newswire may or may not be of definitive benefit. Either way, it appears the more companies try to “dress up” their digital ads as press releases and either self-publish or distribute via somewhat anonymous channels, the more their press releases are perceived as blatant, biased PR tools rather than informative stories.

Beyond that, there is a growing trend towards high-quality, engaging content, so whether you’re publishing digitally or not, there is a definitive benefit in preparing, crafting, and targeting press releases as a part of an effective and respectable marketing strategy that benefits organizations, publications and the public in a genuine way.