For the Love of Words: A Writing Agency’s Story

Home » Blog » For the Love of Words: A Writing Agency’s Story

FOR THE LOVE OF WORDS: A WRITING AGENCY’S STORY

“I’ve always loved writing; I really had a passion for it all my life,” says Wintress Odom, owner and editor-in-chief at The Writers for Hire (TWFH), a Houston-based writing agency with clients across the U.S. and the world.

When she started out as a solo freelance writer over 20 years ago, Wintress Odom didn’t know that both adversity and success lay ahead. She would need to meet challenges and make changes during those years to grow her writing business and keep it growing.

A Writer by Nature

Throughout high school, Von Mayer had stayed at the head of her class in English, and her early ambitions involved becoming a science fiction writer. “I have a few half-baked books still hanging around,” she muses.

During college, she says, writing was the only part of the science labs she enjoyed:

I kept messing a lab up so badly that we had to keep redoing it. It was a big deal because we had to refill the pipettes and re-centrifuge them. Eventually, I asked my very brilliant lab partner if I could just stop touching things and write the report instead. I think she was relieved. She finished the lab perfectly and I got to write the report, which she seemed more than happy to get out of.

Getting Started, Becoming a Writing Agency

Unsure which career direction to take, the new graduate searched for an answer with her fiancé Sean Odom while she worked as a bartender and waitress.

“We were young,” muses TWFH’s owner, “and we talked about [owning] vending machines. At one point [he] wanted to be a talent scout for baseball, or we were going to inherit his family farm and run that. We were all over the place.” 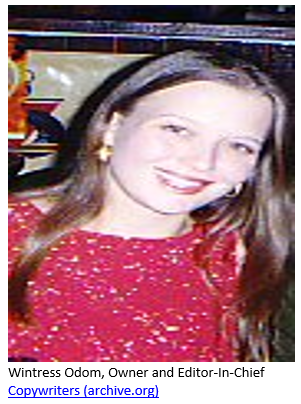 Even as they worked through the options, her penchant for writing was never in question.

While his future wife had finished her degree, Sean had taken courses in Search Engine Optimization (SEO).

After her graduation, he landed an internship in the emerging field of attracting customers via the internet.

“He had just started in SEO,” she remembers, “so I put up a little website, and it kind of coincided with me graduating. I didn’t really intend to start a writing business. I intended to freelance while I was figuring out what to do with my life. So instead, what happened was I started to get busy with writing.”

The two were married in September of 2001, as the new writing business was taking off.

Ranking on search engines was “a lot easier” in those days, Odom reflects, “so I put up all sorts of stuff and I was getting leads all over the place from the Internet.” Enhanced by Sean’s knowledge of SEO, one website had become two: thewriterforhire.com and thefreelancewriter.com.

“He was absolutely instrumental in getting the business going,” Odom says of her husband’s role. “It was because of the websites and the fact that he was able to get me leads that started the whole thing, really.”

Too busy with writing to keep her bartending and waitressing gigs, she gave them up. When a satisfied client had to be told there would be a three-month wait for a newsletter, he took his business elsewhere. Odom decided it was time to get some help.

Posting an ad in her alma mater’s newspaper, she found fellow Rice graduate Meghan Whitmore and hired her as a co-writer. Soon, she also hired Julianna Amim and Holly McReavy as copywriters, planting the seeds of a writing agency.

An early TWFH homepage told prospective clients: “I believe any piece of writing is worthy of perfection, be it a three-hundred-page company handbook, a vacuum cleaner manual, or the back of a box of macaroni and cheese.”

On the same page, Odom added, “I have always gone the extra mile for my clients. You will find that I am meticulous, that my work is original, and that I will consistently produce above and beyond expectations.”

Happily, Odom remembers, “one of our largest customers for a while, one that I was super excited to get, a huge customer for me … was a serial entrepreneur [who] would put up websites on all of these crazy things. I wrote all of his websites on funny products like deer whistles and covert coolers and emu oil.”

Growing the Agency, Writing Through the Challenges

From 2003-2005, the writing agency’s client base grew to more than 50, including firms like Mitsubishi and Caterpillar Forklift Trucks. Its writing and office staff grew, too. 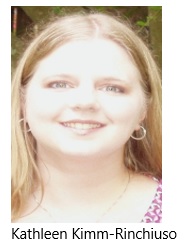 Kathleen Kimm had worked as an auditor at Yellowstone National Park, where she met her husband before moving to his native Houston and Odom’s neighborhood.

The women became friends, and then co-workers when Kimm-Rinchiuso took over bookkeeping and accounting at TWFH as Administrative Assistant.

She is still with the agency as Office Manager.

Rinchiuso remembers those early years: “We had hired several full-time, on-staff employee writers and we had a house we were using as office space, and everybody was coming in person.”

Much of that would change with the coming economic storm that crushed many U.S. businesses.

“The economy was just doing awesome up until about 2007/2008 when we had that big financial crash,” Odom recalls. “When that crash happened, it was like the phone wouldn’t stop ringing with clients who just weren’t doing business with us anymore.”

Some clients didn’t even notify TWFH about dropping its writing services, she says, “Like [when] the entire department of a Fortune 100 financial company that we were working with got canned. We had some really exciting accounts, and then everybody just left. It was rough.”

The economic downturn meant that Odom would need to make some tough decisions. “We put everybody on contract except for two people,” she remembers. A lot of people didn’t want to be on contract. It was a heartbreaking ordeal. Some people found other work.

“We got rid of the office; everyone went back to their homes. I always thought we would go back to the office, but after a few months, I was able to get a little bit of perspective and rethink it. I’d talk to people, and they’d say, ‘I’d rather stay home,’ so I said, ‘Well, just stay home then.’”

The agency’s home-based writers continued to craft personal pieces like autobiographies and memoirs; along with business pieces like website copy, press releases, business proposals, manuals, or almost anything else a client needed.

A bright spot appeared in the darkness of the failing economy when TWFH was awarded the 2007 Better Business Bureau Gold Star Award (it would again win in 2012).

Despite the poor economy, the writing agency grew. “We have really grown organically,” says Odom. “It seems like every year we add two or three more writers.”

Amazing, but true: The Writers for Hire is one of the only firms in the nation to offer writing as its sole service. Writing and information marketing are our core focuses—that means we build your projects around thoroughly researched, solidly planned, no-filler-fluff content. We craft the words that quarterback your ideas, close your sale and do the legwork for your branding.

The collaborative approach that began to take shape when Odom hired her first co-writer became central to the writing agency’s methods. TWFH began using writing teams and objective proofreaders and editors to complete and refine each project.

From its beginnings, the agency was versatile, offering a variety of writing services for businesses and individuals. Its versatility grew as the writing staff grew in size and diversity—writers’ prior specialties in various industries enabling them to speak the professional “languages” of their clients or pick them up quickly.

Teamwork and versatility have been important pieces of TWFH’s customer-oriented viewpoint since the early years.

“I’ve really worked hard to keep the clients happy, and that’s been really important to me,” Odom reflects. “I don’t understand not having good customer service. I care too much. We still actually have one client that’s been with us for about 20 years. In general, we try to build lasting relationships with our clients.”

The writing agency’s website affirms: “The vast majority of our business comes from repeat customers, many of whom we’ve worked with for more than 10 years.”

Today, TWFH’s client list numbers over 500, with Fortune 500 companies among them.

The company’s large portfolio showcases work across a spectrum of industries and forms of writing.

The agency’s work has appeared in over 40 well-known publications, among them:

With about 25 current writers and staff, TWFH writing teams produce an array of writing projects for individuals and businesses. Odom says she likes tackling her favorites in both categories:

On the personal side, I really love doing the family histories and autobiographies. I love the genealogical work; it’s just so much fun. And the autobiographies are great because you really get to hear about people’s lives and experiences, and oftentimes you get to learn really neat stories. We’ve had some fascinating clients from different cultures, and different heritages. One of our stories was about a lady who was in the Nazi Youth, and after the war, she fell in love with a soldier. She didn’t speak any English and came to New Mexico. She was tough. That is completely different than the other thing I love doing, which is solving big, complex problems like campaigns. I like putting together thought leadership campaigns with all of the moving parts to achieve a goal with a lot of different types of content. I like solving problems with content.

For her part, Rinchiuso’s role at the writing agency has expanded. While still handling invoicing, collections, HR, and payroll, she says she also manages certain writing projects:

I do a lot of project management as well, especially anything involving programming or website design projects—I will often manage that portion of it, and I kind of work with the website developers to make sure they’re doing what the client wants. Also with the bigger projects I help coordinate and make sure all of the writers are hitting their deadlines.

Odom and Rinchiuso have shared the writing agency’s successes and challenges through the years while ensuring it’s delivered consistently for clients.

The owner’s unintentional “decision” to start a writing business as a new college grad seems to have been the right one. As she explains: “I like the journey, I love the clients, I love the work, I love the team. I’m happy with the organic growth. I don’t necessarily want to run a venture capitalist start-up, a massive-growth company. That doesn’t sound like fun to me.”

Summing up the reasons she loves her business 20 plus years down the road from its small beginnings, Odom says:

I think it’s just the fact that I always loved the written word; writing is like a puzzle to me, I like putting concepts together in the most optimal fashion for whatever the format is. I just like learning about stuff; I find so many things fascinating, so really, it’s kind of the perfect job for somebody that couldn’t decide what to major in. You get to major in all of them.